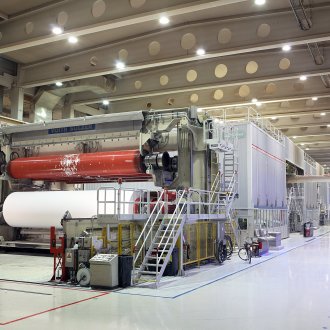 Paper Machine 11 will undergo extensive modernization of automation and electrical equipment including drives, control systems, quality control and inspection systems as well as upgrades to the coating profile and other areas.

Dec. 15, 2022 - Sappi Europe announced an upgrade and modernization project at its Gratkorn mill in Austria. The project will focus on Paper Machine 11 (PM11), which will undergo extensive modernization of automation and electrical equipment including drives, control systems, quality control and inspection systems as well as upgrades to the coating profile and other areas.

The amount of the investment was not disclosed.

The Gratkorn mill is Europe's leading producer of coated woodfree paper on two paper machines, supporting Sappi Europe's core Commercial Print business. The mill has benefited from a regular investment program, including in recent years the upgrade of the PM9 in 2019.

During the preparatory phase in December and the main period of work in January, production on PM11 will be interrupted for a number of weeks. Some interruption will also occur on PM9 due to the need for a reorganization of internal logistics.

Given current market conditions of reduced demand and high customer inventories, Sappi Europe does not expect customer' business to be disrupted during the project period.

About the Gratkorn Mill

The Gratkorn Mill, located in Gratkorn, Austria, produces 980,000 tons per year of high-quality double and triple coated papers annually which are used for premium quality publications all over the world. The mill produces 250,000 tons per year of totally chlorine-free (TCF) bleached chemical pulp for its own consumption and it has an annual sheet finishing capacity of 875,000 tons. About 95% of the mill’s production is exported.

Headquartered in Brussels (Belgium), Sappi Europe is a division of Sappi Limited and is a leading European producer of coated graphic paper as well as packaging and speciality papers.