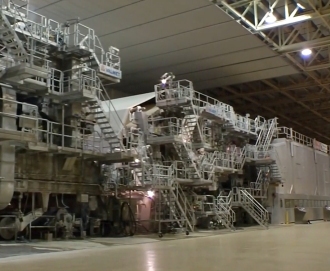 In February of 2021, PCA announced a plans to convert the Jackson Mill's No. 3 uncoated freesheet paper machine to the production of 700,000 ton per year virgin kraft linerboard.

Nov. 18, 2022 (The Thomasville Times) - The Packaging Corporation of America (PCA) paper mill in Jackson announced to its employees last week a layoff of virtually all of its 400-plus workers and a temporary idling of the mill.

PCA issued this brief statement through the Jackson mill: "Due to economic conditions and lower demand for our products, we have temporarily laid off workers at the Jackson mill. The mill is currently idled. We fully intend to resume operations after the holidays."

High inventories of linerboard and cardboard boxes manufactured from the linerboard have been cited as the reason to temporarily suspend manufacturing to let inventories catch up with demand.

Rumors had been floating around for weeks of a possible shutdown but they could not be confirmed and PCA indicated that work was continuing.

When the announcement came, Jackson Mayor Paul South said he was as surprised as anyone. He said he had no forewarning. He wasn't happy with the news but said PCA is important to the local economy and to providing local jobs.

In fact, South had just stated at the Nov. 7 city council meeting that rumors of a closing were unfounded and that PCA officials had told him they would not invest $500 million in the mill to not operate it.

The complete story is available on the The Thomasville Times website: www.thethomasvilletimes.com/articles/jackson-paper-mill-lays-off-employees-idles-production.