Pratt Industries to Invest $5 Billion in Recycling, Clean Energy Infrastructure and Manufacturing Jobs in USA over Next 10 Years 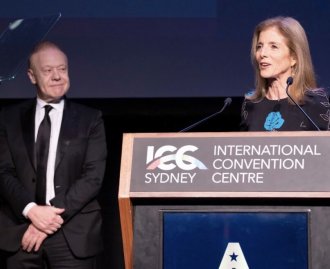 Anthony Pratt made the pledge — his largest ever commitment — to Caroline Kennedy, the U.S. Ambassador to Australia, at a recent black tie event in Sydney.

Anthony Pratt made the pledge — his largest ever commitment — to Caroline Kennedy, the U.S. Ambassador to Australia, at a recent black tie event in Sydney.

"Pratt Industries is proud to already be the largest Australian employer of Americans — providing 11,000 well-paying, green-collar jobs in more than 70 factories across the nation," Mr. Pratt said.

Part of the new commitment is already taking shape in Henderson, Kentucky, where the company is building its 6th, 100% recycled paper mill. An investment of $500 million, the mill is one of the biggest economic development achievements in Western Kentucky in the past 25 years.

Pratt is also building a 700,000 square-foot corrugator plant adjacent to the mill. The combined project expects to bring more than 300 full time jobs to the area and more than 700 jobs for the construction phase.

Earlier this year, Pratt announced plans to open a regional manufacturing and innovation center in Cedar Hill, Texas, outside of Dallas, where it will occupy one million square feet and invest more than $200 million in equipment and building improvements. The company also plans to employ 150 full time workers at the new facility.

In October, Pratt officially opened its $200 million corrugator plant in Park City, Kansas, outside of Wichita. The one million square-foot facility is expected to create 300 full time jobs.

"The value of our investment in American recycling and clean energy infrastructure is already now over $10 billion," Mr. Pratt said. "In America, steady growth is forever and we are honored to have built five out of the last seven paper mills, all 100% recycled."

Mr. Pratt said recycling was an important weapon against climate change "because as things decay in landfill they emit methane, which is 84 times more potent than carbon dioxide over a 25-year period. As a result, landfills emit more greenhouse gases than global aviation."

Pratt Industries also believes in investing profits back into the business, its people and the communities it serves, helping to make it one of the fastest growing companies in the industry. "We reinvest our profits in new factories, new machinery, high-tech robotics and artificial intelligence, and our people," Mr Pratt said.