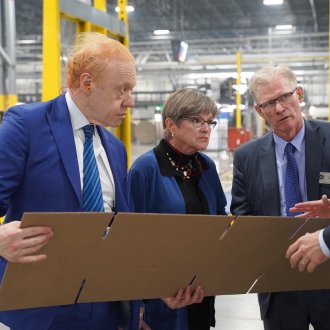 Oct. 17, 2022 - Governor Laura Kelly on Oct. 4 joined officials from Pratt Industries as they opened their new state-of-the-art advanced manufacturing corrugated box plant in Park City. The plant represents a $200 million investment that will create 58 new high-paying, quality jobs in Sedgwick County over the next five years.

The Governor and Pratt executives took a tour of the plant and gave remarks celebrating the company's investment.

"Pratt's continued investment in our state shows that when we support workers and businesses, Kansas thrives," said Governor Laura Kelly. "Now, 58 more Kansans will have high-paying jobs and $200 million will be brought into Park City — reinforcing that we all benefit from our growing economy."

The almost 1 million square-foot Park City facility will accommodate increased production capacity, employ 300 full-time "green collar" manufacturing jobs, and increase its presence in the greater Wichita area. The company will continue its recycling operations at the existing Wichita facility and use the new plant for manufacturing operations.

Executive Global Chairman, Anthony Pratt, said, "I commend Governor Kelly for her strong economic leadership which has attracted more than $14 billion of new business investment in Kansas since 2019, including our $200 million investment in Wichita. The box factory will employ 300 Kansans in well-paying, green collar manufacturing jobs at an average wage of almost $100,000 per person — and will allow the company to grow for years to come, supporting our customers, employees and the community."