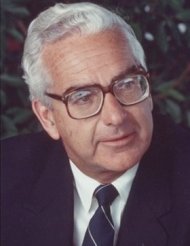 June 14, 2022 (Press Release) - Weyerhaeuser Company is deeply saddened to learn of the passing of George H. Weyerhaeuser Sr., long-time former leader and great-grandson of founder Frederick Weyerhaeuser. Weyerhaeuser served as president and CEO from 1966 to 1991 and continued to serve as Board chairman through 1999. He oversaw significant growth of the company, including a number of major timberland acquisitions, and had an enduring impact on the evolution of forest management at Weyerhaeuser and across the industry. He was 95.

"George was an extraordinary person and leader - one of the most influential in the history of the industry," said Devin Stockfish, president and chief executive officer. "Over his many years as president and CEO, he brought transformational changes to our company, including important advances in sustainable, high-yield forestry and wood products research, as well as expansion into overseas markets, among many other achievements. He left a tremendous legacy and will be greatly missed by everyone in the greater Weyerhaeuser family and community."

The Weyerhaeuser family is planning a memorial service for later this summer.

Weyerhaeuser Company, one of the world's largest private owners of timberlands, began operations in 1900. The company owns or controls approximately 11 million acres of timberlands in the U.S. and manage additional timberlands under long-term licenses in Canada.