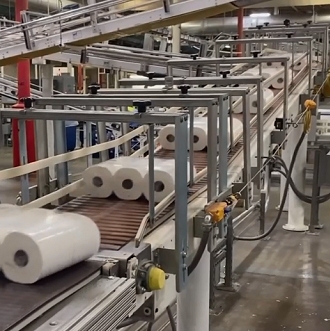 The Muskogee Mill has proposed investments of more than $50 million during the next three years to improve the safety, reliability and efficiency of operations.

April 29, 2022 - Georgia-Pacific has announced plans to upgrade areas of its 640-acre Muskogee (Oklahoma) bath tissue, towel and napkin manufacturing operations. The Muskogee Mill has proposed investments of more than $50 million during the next three years to improve the safety, reliability and efficiency of operations in addition to the investment of a new production line and equipment.

"These investments will help Georgia-Pacific continue our focus on transforming manufacturing equipment and processes that result in better employee safety, environmental performance, reliability and quality," said Amy Borovich, Muskogee Mill Facility Leader. "We appreciate the support from all of our Muskogee community partners, including the Muskogee City-County Port Authority, City of Muskogee, and the City of Muskogee Foundation."

Georgia-Pacific's Muskogee Mill employs more than 700 people, making it the largest private employer in the city. The mill makes bath tissue, paper towels and napkins for both retail and away-from-home markets, including such well-known consumer brands as Sparkle®.

"We are pleased Georgia-Pacific is investing in their facility and deepening their roots in Muskogee," said Muskogee Mayor Marlon Coleman. "Their decision to grow here is a testament to our region's skilled workforce and business-friendly environment."

On Tuesday, the Muskogee City-County Port Authority Board of Directors approved up to $500,000 in local incentives through its Strategic Investment Program (SIP).

"The SIP incentive demonstrates partnership between new and existing industries and the Muskogee community, it's a differentiator for us." said Jeff Underwood with the Port of Muskogee. "We are delighted to partner with Georgia-Pacific for their continued growth in Muskogee through this program."

The SIP was created in 2014 and is funded through a grant from the City of Muskogee Foundation. The program allows the Port Authority to consider incentive awards to companies with qualifying job creation and/or qualifying investment in new or expanded facilities.

Georgia-Pacific received its first grant award in 2015, and to date, has received incentive payments in return for more than $175 million in new investments made in Muskogee.

"We celebrate the reinvestment of operations in Muskogee," said Port Director Kimbra Scott. "More and more companies are realizing that Muskogee is a great place to be because they see companies like Georgia-Pacific continue to find success here."