SCA to Invest SEK 150 Million at Munksund Mill in Sweden 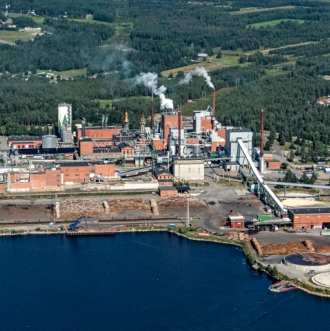 SCA's Munksund mill has the capacity to produce 410,000 tonnes per year of kraftliner. It also uses spruce, pine and birch to produce kraft pulp.

March 18, 2022 - SCA said that it will invest SEK 150 million in new equipment for treating black liquor at its Munksun paper mill in Pileå, Sweden.

SCA explained that the treatment of black liquor is an important step in the chemical recycling process after pulp has been boiled.

"We will increase our production of pine oil, which is used to produce biofuels. At the same time, we'll reduce energy consumption," said Jens Riglert, site manager at Munksund's paper mill.

Pine oil is a by-product of the production of pulp and originates from the wood used in the process. The chemical industry has long used pine oil to produce a wide variety of products including paint and detergents, but now it is also a sought-after raw material for producing biofuels.

"Pine oil is key to the transition to a fossil-free society. It can replace fossil fuels and thus help reduce global warming. Demand is increasing in Sweden and globally, as interest in biofuels increases," Riglert said.

"This is a reinvestment we are making, as existing equipment will soon become obsolete. Due to new technology now available, our processes will be more efficient, while at the same time enabling us to achieve several sustainability benefits," he added.

SCA said the investment will also mean that the so-called 'soaping effect' will be greater, which means that it will be possible to extract a greater proportion of the soap contained in black liquor. This is important because the soap is used to make pine oil.

The amount of soap extracted will increase by 24 percent, the company said.

"The soap that we are unable to extract from the lye will be incinerated, with the heat being used to produce energy for the mill, so it is not wasted. But making pine oil from the soap is better, in terms of sustainability and financial performance," Riglert said.

Another major advantage with the investment is that it will reduce energy consumption at the paper mill.

"The process will be more energy efficient as we will need to use less energy for the evaporation process. Energy consumption will be reduced by 1.4 per cent," Riglert noted.

SCA's Munksund mill has the capacity to produce 410,000 tonnes per year of kraftliner. It also uses spruce, pine and birch to produce kraft pulp.