New Paper Bags for Waste to Be Tested in Sweden 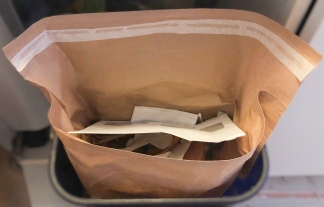 Four companies in central Sweden have collaborated to develop a paper bag for residual waste, which soon will be released for testing in Karlstad, Sweden.

Jan. 14, 2022 - Carrier bags made of paper are becoming more common in Swedish waste bins as plastic bags are being phased out in the stores. But the paper bags are not adapted for residual waste, which creates problems in the system. Now, four companies in central Sweden are working together to give paper bags a given place in the waste management system.

Since last spring Paper Province, Karlstads Energi AB, Nordic Paper and Norbag have collaborated to develop a paper bag for residual waste. The new bag has the potential to make waste management more efficient and sustainable.

Plastic bags have become more expensive and rare in stores, which affects how Swedes handle their waste. Consumers tend to re-use the paper bags as waste bags, but since they can't be closed in the same way as plastic bags they cause problems such as messy bins and containers.

Karlstads Energi and the rest of the development team wants the new paper bag to be a cost-effective alternative that is better for the environment than plastic carrier bags. They also hope that the fibre-based bag will eventually become a more sustainable alternative to plastic waste bags that are sold in stores.

Replacing plastic bags reduces the amount of plastic in waste incineration and thus also the carbon dioxide emissions of incineration.

"For Nordic Paper, this is completely in line with many customers' wish to replace plastic with paper. Our strong kraft paper, made from renewable local raw materials, is constantly increasing in demand. In addition, collaborating with other local companies is something we have done before and is something we are happy to continue with," says Pia Lundin, Product Manager for Kraft paper at Nordic Paper.

The development of the new paper bag is proceeding well and will shortly be released for testing in Karlstad. The goal is to sell the bag in local stores in 2022.

The development project is coordinated by Paper Province and the need has been raised by Karlstads Energi. The actors in the project contribute with paper, bag manufacturing, printing, pilot testing, advice, evaluation and marketing.

"Launching new ideas for change is easy when expertise, cooperative companies and renewable raw materials are just around the corner. Our role is to bring together companies that can realise sustainable development through projects like these, and I hope and believe that consumers will like the waste bag," says Peter Edberg, project manager at Paper Province.

Paper Province is a world-leading business cluster within the forest bio-economy. It is owned and operated by more than 100 member companies. The cluster is based in Karlstad, Sweden, and mainly operates in the province of Värmland and the surrounding area, but also nationally and globally. To learn more, visit: paperprovince.com.