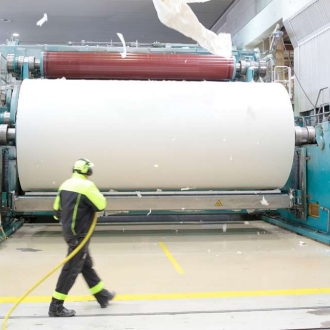 The strike would start at UPM mills on Saturday 1 January 2022 and would end on 22 January 2022 unless an agreement for a new collective agreement is reached before then.

Dec. 15, 2021 (Press Release) - The Finnish Paperworkers' Union has issued a strike announcement to UPM, declaring a strike to all work under the expiring paper industry collective agreement at UPM.

Should the strike materialise, UPM strives to meet customer demand through deliveries from its mills outside Finland to the extent possible. UPM will not disclose the financial impact of the possible strike at this point.

"We have sent several invitations to the Paperworkers' Union since last spring, but the invitations have not been accepted. The strike announcement is an exceptional procedure, as the announced strikes are taking place in businesses in which any negotiations have not started, apart from the UPM Lappeenranta Biorefinery. Thus, the strike announcement is given before even the negotiating objectives have been presented on either side. In our view, the negotiating parties have a duty to do everything in their power to reach an agreement before resorting to a strike or an external conciliation process. Now this has not happened," says Riitta Savonlahti, UPM's Executive Vice President for Human Resources.

"Despite the strike announcement, we continue to aim for business-specific collective agreements with the Paperworkers' Union and begin negotiations as soon as possible, as we did with the Industrial Union. Through an agreement everybody can reach better terms of employment than without one," Savonlahti notes.

The Paperworkers' Union has not excluded any work from the strike, not even tasks critical to the society, such as operating and maintenance of water treatment and power plants.

It is, however, important that the essential services for society are taken care of. Therefore, the businesses falling under the strike will pay additional fixed-term salary for those in businesses' mill organizations who are looking after their duties during the strike. UPM's businesses have communicated earlier the terms of employment that will be applied when the current national level CLA ends and there is no new agreement. The pay, together with the additional fixed-term salary will exceed that of the current, expiring CLA.

UPM has approximately 10,000 subcontractors in Finland and the company accounts for about 12% of maritime transport. UPM's subcontractors are mostly small or medium-sized companies, for whom the interruption of operations can be a major challenge. For example, the strike would immediately impact on various transports to and from the mills as well as on the workload in seaports. In maritime transport, the absence of UPM's cargo would have an impact within a week of the strike. In case of the strike, UPM's wood procurement would be adjusted to the needs of sawmills and plywood mills.

Last week UPM and the Industrial Union signed two three-year collective labour agreements for UPM Plywood and UPM Timber businesses. In addition to the union's representatives, the business management and local shop stewards were also involved, which brought much-needed understanding of the business and the everyday work to the negotiations. UPM aims to involve a much wider range of people also in the negotiations in other businesses.