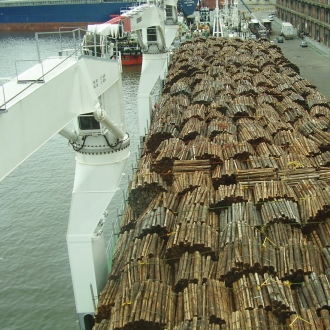 During the first nine months of 2021, almost 80% of all imported logs to China came from New Zealand, Europe, and Latin America.

Nov. 23, 2021 - European softwood logs were practically non-existent at Chinese ports five years ago. However, a combination of a never-ending hunger for more wood in the country, reductions in shipments from previously significant trading partners, and an oversupply of timber in Europe have altered the log flow into China over the past four years, according to the latest Wood Resource Quarterly (WRQ) report.

New Zealand, Russia, and the US accounted for almost 75% of the total import volume to China in 2017. However, throughout 2020 and 2021, there were sharp declines in supply from Russia and the US, while shipments from Europe and Latin America rose. During the first nine months of 2021, almost 80% of all imported logs came from New Zealand, Europe, and Latin America.

The European entrance into the Chinese market has been dramatic, increasing from less than 500,000 m3 of softwood logs in 2017 to an estimated 14 million m3 for the entire year in 2021, WRQ reports. Europe's share of the total import volume is currently 30%, with Germany being the second-largest supplier to China, following New Zealand.

German shipments have surged from about 200,000 m3 of logs in 2018 to 3.8 million m3 in 2019, and estimates indicate import volumes may reach over 10 million m3 in 2021. Log imports from the Czech Republic grew rapidly in 2019 but have since levelled off, with the estimated volumes in 2021 likely to be substantially lower than in the two previous years (see chart below). Shipments from Germany and the Czech Republic have accounted for the vast majority of the European logs entering China. Several other countries have increased their presence in the past three years, including Poland, France, and Slovakia. 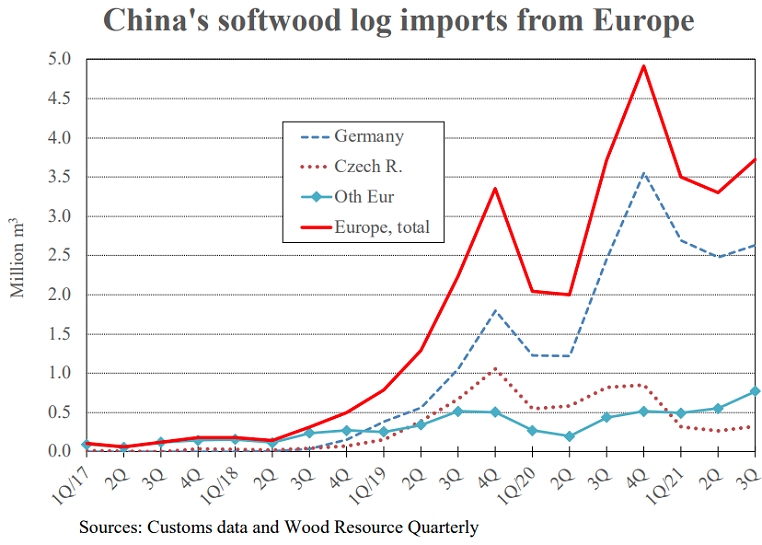 Europe's oversupply of logs is beginning to diminish, and domestic demand is increasing. Thus, while the rise of European exports to China has been dramatic, the trend is unlikely to continue, making the high of almost five million m3 exported in the 4Q/20 a likely peak.