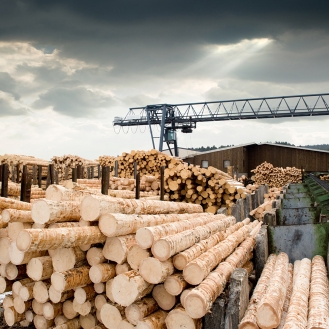 Over the past year, softwood fiber costs have gone up worldwide between 5% and 20%, except for in the US and Germany, where wood chip prices have fallen substantially.

Oct. 7, 2021 - Softwood fiber costs were generally higher worldwide in the 2Q/2021 than in the previous quarter despite an increase in the supply of residuals from sawmills in Europe and North America. Practically all regions covered by Wood Resources Quarterly (WRQ) experienced quarter-over-quarter price increases in the range of 1-5%. The major exception was British Columbia, where wood chip prices were up by almost 20% because of tighter fiber supply and higher NBSK pulp prices. Over the past year, softwood fiber costs have gone up worldwide between 5% and 20%, except for in the US and Germany, where wood chip prices have fallen substantially.

The higher softwood fiber prices resulted in a two-year high of over $92/odmt for the Softwood Fiber Price Index (SFPI) in the 2Q/21. However, with only a modest increase of the Hardwood Fiber Price Index (HFPI) by one percent q-o-q to $84.41/odmt, the discrepancy between the two indices rose to the widest margin since 2007.

Hardwood fiber prices in most major pulp-producing countries saw minor price adjustments in the 2Q/21. However, a few regions, such as the US South, Eastern Canada, and Spain, stand out as being places where the costs of hardwood pulplogs have gone up over 5% from the 1Q/21.

Trade of hardwood chips in the Pacific Rim has increased rapidly for four consecutive quarters to reach a record-high of 6.7 million odmt in the 2Q/21. During the same quarter in 2020, shipments were at a six-year low of only 5.0 million odmt. China continues to be the primary destination for exported wood chips, accounting for over 60% of all traded wood chips in the region. Japan's share has fallen to 34%, while the balance is imported by pulpmills in South Korea and Taiwan.

Japan's wood chip import volumes in 2021 have bounced back from their recent lows during the initial period of the COVID epidemic in early 2020. However, the quarterly shipments in 2021 have been more than 10% below their 5-year average before the exceptional decline in 2020.

The overall changes in supply sources in 2021 have been China's diversification and Japan's concentration of imports from fewer countries. For example, China has predominantly relied on Vietnam and Australia in the past but has recently expanded imports from Thailand, South Africa, and Brazil. In contrast, Japan has increasingly purchased wood chips from Vietnam and Australia while reducing importation from Brazil and Chile.