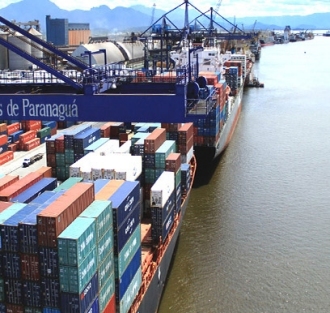 In its first year of operations, Klabin expaects to move 1.4 million tons of pulp and paper through its new terminal at the Port of Paranaguá in Brazil.

Aug. 10, 2021 – Klabin has started construction on its new terminal on the quay of the Port of Paranaguá, following the signing of the permit in July by the Port of Paraná. In this phase, the project is expected to create 180 new jobs.

Once the terminal starts commercial operations, it will require around 170 direct and indirect employees.

“This location on a primary site will further streamline our pulp and pulp byproduct operations,” said Luiz Fernando Garcia, CEO of Parana Ports. “It represents an important investment in the state’s port infrastructure that will create new jobs and generate income for the coastal region.”

In addition to acquiring equipment and operational systems, a two-kilometer rail branch and a 21,860 square metre warehouse will be built. The investments, which is estimated to total R$130 million, are slated for 2022.

The concession to operate area PAR01, with 27,530 sq.m, was won by Klabin in an auction held in August 2019. The signing of the concession contract, in early 2020, effectively ended two decades without any new concessions granted at the Port of Paranaguá.

The concession contract is for 25 years and may be renewed for another 45 years.

“We’re thrilled to be starting construction on the new terminal, which will follow all safety and health protocols,” said Sandro Ávila, director of Operating Planning, Logistics and Procurement at Klabin. “This is a very important project for the company that will make a big social and economic contribution to Paranaguá.”

In line with its commitment to fostering the development of local communities, Klabin also is making important social investments in the city. These include the Public Administration Support Program, which offers administrators (mayors, municipal secretaries and their teams) techniques in public administration and the tools for planning and monitoring actions, effectively leveraging their control of the actions planned and executed by municipal governments.

Klabin also will implement all conditions for the Neighborhood Impact Study (EIV), which envisages the construction of an exclusive pedestrian overpass spanning the main rail crossing, which will benefit around 2,800 workers per day, ensure safer access to the port, and also generate benefits in the social arena, which include environmental education programs at schools.

Klabin is Brazil's largest paper manufacturer and exporter, and the country's leading producer of papers and paperboard for packaging, industrial bags and corrugated board packaging. To learn more, visit: www.klabin.com.br.