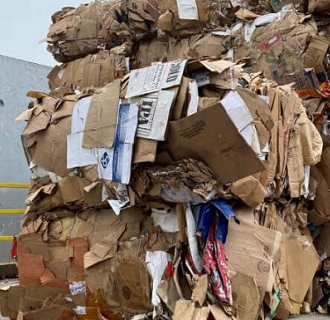 A key element of Project Horizon is construction of a new stock prep system to provide approximately 650 tons per day of recycled fiber to the rebuilt #10 machine and other Hartsville cylinder machines.

"The conversion of our corrugated medium machine (#10 machine) to URB is expected to be completed by the end of the second quarter of 2022, and there are a number of significant construction projects underway that will modernize the infrastructure of the entire Hartsville Mill Complex and allow for more efficient and safe handling of raw materials and finished goods," said Tim Davis, Division Vice President and General Manager, Paper & Adhesives, U.S./Canada.

A key element of Project Horizon is construction of a new stock prep system to provide approximately 650 tons per day of recycled fiber to the rebuilt #10 machine and other Hartsville cylinder machines. The new stock prep system will allow for increased consumption of lower-cost mixed paper, along with Old Corrugated Containers (OCC), and should be operational in October 2021, Davis said.

As previously announced, Sonoco will be exiting the corrugated medium market by early 2022 and expects URB capacity through its U.S. and Canada mill network to remain neutral at approximately 1.2 million tons. Based on the progress of Project Horizon, the Company now expects to permanently shut down its Hartsville #1 and #9 URB cylinder machines which will reduce annual capacity by approximately 70,000 tons. The exact timing of the closures will depend on market conditions as well as the start-up of the converted Hartsville #10 machine.

In 2020, Sonoco permanently shut down a 30,000 tons/year machine in Hartsville and its 95,000 tons/year Trent Valley, Ontario, Canada paper mill.

The new Hartsville machine is being designed with the goal of being the lowest cost URB machine in the world, with the capability of producing a wide range of high-value paper grades to service Sonoco's industrial and consumer converted products businesses and external trade customers.

Project Horizon is projected to drive $30 million in annual cost savings by 2023, ensure the long-term viability of the Hartsville paper mill complex and place its U.S. and Canada URB mill system into the top quartile of performance from a cost perspective, Davis said.

Sonoco is one of the world's leading producers of URB with the capability of producing approximately 2 million tons annually. The Company is also one of the largest URB producers in the U.S. and Canada operating 11 mills and 18 machines in South Carolina, Tennessee, Virginia, Massachusetts, Kansas, Wisconsin, California, Washington and Ontario, Canada. To learn more, visit: www.sonoco.com.