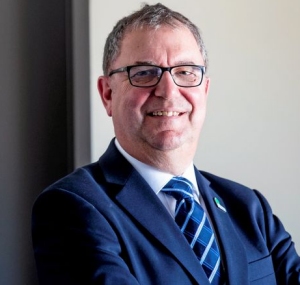 "The strong pricing for lumber and a release of working capital allowed us to generate almost $160 million of cash from operations in the quarter and helped to make up for challenging conditions in our pulp and paper segments." – Yves Laflamme, President and CEO, Resolute Forest Products.

"We're pleased with the performance of our wood products segment and its ability to drive bottom-line impact from strong end-markets like what we've seen in the second half of 2020 with the rebound in U.S. housing starts and robust demand for repair and remodeling activity," said Yves Laflamme, president and chief executive officer.

"The strong pricing for lumber and a release of working capital allowed us to generate almost $160 million of cash from operations in the quarter and helped to make up for challenging conditions in our pulp and paper segments, which are still recovering from the economic effects of the pandemic.

"Last quarter we took advantage of our strong financial performance to repurchase an additional 2.1 million shares of our common stock, for a total of 8% this year, and we recently refinanced our $375 million of outstanding 5.875% notes due 2023 with $300 million in new 4.875% notes due 2026 on very favorable terms and conditions."

Operating Income Variance Against Prior Period

The company reported operating income of $4 million in the quarter, compared to $97 million in the third quarter. The quarterly results reflect a sequential increase in shipments ($14 million), mostly paper, offset by an increase in costs ($23 million) due to higher maintenance and log costs and lower internal power generation, as well as the impact of the stronger Canadian dollar ($8 million). The lower operating income includes non-cash charges related to the temporary idling of the Baie-Comeau and Amos, Quebec, newsprint mills ($80 million) in response to the effects of the pandemic. The operating income also includes a credit of $10 million under the Canada Emergency Wage Subsidy ("CEWS") program, based on the significant drop in revenues in the company's pulp and paper segments through the end of October. The CEWS support partially offset the costs associated with keeping the two mills in "hot idle" mode.

For all of 2020, the company generated operating income of $99 million, an $82 million improvement over 2019. It reflects the favorable impact of the increase in market prices in the wood products segment ($239 million) and tissue segment ($10 million), the added contribution from the 2020 acquired U.S. sawmills ($45 million), an overall reduction in manufacturing costs ($84 million), including lower maintenance and energy costs, the fourth quarter CEWS credit, dispute settlements and other items, as well as the favorable impact of the weaker Canadian dollar ($15 million). The operating income variance also reflects the unfavorable effect of lower pulp and paper pricing ($219 million), lower paper shipments ($75 million) and the net unfavorable impact of charges and assets disposition gains related to newsprint capacity reduction initiatives ($26 million).

As of the second quarter 2020, the company's results from the newsprint and specialty papers segments have been combined into one paper segment. Comparative information, including the information in this earnings release, has been modified to conform with the revised segment presentation.

The market pulp segment recorded an operating loss of $4 million in the fourth quarter, unchanged from the previous quarter. The average transaction price improved by only $3 per metric ton, but shipments rose by 11,000 metric tons. The operating cost per unit (the "delivered cost") rose by $2 per metric ton and finished goods inventory fell to 53,000 metric tons by year-end, a historical low. EBITDA in the segment was unchanged at $2 million.

For 2020, the market pulp segment reported an operating loss of $1 million, compared to operating income of $39 million in 2019. The change reflects lower pricing across all pulp grades, down on average $92 per metric ton, and a 38,000 metric ton reduction in shipments, primarily due to pandemic-induced market downtime for recycled bleached kraft pulp. On the other hand, the delivered cost fell by $57 per metric ton, with lower maintenance costs and less spending. EBITDA in the segment was $23 million for the year.

The company reported an operating loss of $3 million in the tissue segment in the quarter, compared to operating income of $2 million in the third quarter. The average transaction price decreased by $77 per short ton, or 4%, due to a higher percentage of parent roll sales following a destocking effort at the Calhoun, Tennessee, mill. The delivered cost increased by $112 per short ton, or 6%. Shipments were 1,000 short tons higher and finished goods inventory was unchanged at 6,000 short tons. Quarter-over-quarter segment EBITDA decreased by $4 million, to $2 million.

In December, the company acquired a converting facility located in Hagerstown, Maryland, with three bath tissue and towel converting lines. The Hagerstown assets will improve converting capacity, extend the company's product offering and expand its territory in the attractive Northeast market.

For the year, the tissue segment reported an operating loss of $1 million, compared to a loss of $16 million in 2019. The average transaction price for the year rose by $107 per short ton with the company's efforts to improve product and customer mix, and the delivered cost fell by $51 per short ton. Shipments were essentially unchanged, as productivity gains for retail products manufactured at the Calhoun operations compensated for a pandemic-driven drop in away-from-home demand affecting Florida operations. EBITDA for the segment improved by $15 million, to $17 million for the year.

The wood products segment generated operating income of $128 million in the quarter, unchanged from the previous quarter. The average transaction price improved by $8 per thousand board feet, to $608, and the delivered cost rose by $12 per thousand board feet, or 3%, on higher stumpage fees for Canadian operations, which generally track lumber prices, and higher maintenance costs. Shipments rose by five million board feet compared to the previous quarter, as robust market conditions carried through the quarter due to strong U.S. housing starts and repair & remodeling activity. Finished goods inventory dropped to 97 million board feet, which is a historical low. EBITDA was unchanged at $139 million.

In 2020, the wood products segment recorded operating income of $276 million, compared to an operating loss of $6 million in 2019. The improvement reflects a $146 per thousand board foot, or 41%, increase in the average transaction price and a 312 million board feet improvement in shipments. The higher shipments reflect the volume from acquired U.S. sawmills and better productivity at Canadian sawmills. The delivered cost rose slightly year-over-year, mostly reflecting higher stumpage fees for our Canadian operations. EBITDA for the segment was $319 million, with the U.S. sawmills contributing $55 million to annual segment EBITDA.

The paper segment incurred an operating loss of $19 million in the quarter, compared to a loss of $12 million in the third quarter. The average transaction price slipped by $11 per metric ton, or 2%, and the delivered cost was unchanged despite higher maintenance costs and lower internal power generation. Shipments, however, improved by 43,000 metric tons, and inventory fell to 96,000 metric tons, as demand, particularly for newsprint, started to recover from the deep contraction experienced in the pandemic. EBITDA in the segment was negative $1 million for the quarter.

In 2020, the company reduced its operational footprint by temporarily idling paper machines representing in aggregate 28% of run-rate capacity in the face of the dramatic reduction in economic activity, particularly for marketing-dependent products like newspapers, inserts, flyers and commercial paper. For the year, the segment recorded an operating loss of $46 million, compared to operating income of $82 million in 2019, reflecting a $75 per metric ton drop in average transaction price and a reduction of 440,000 metric tons in shipments. Nevertheless, the delivered cost improved by $5 per metric ton, and EBITDA for the segment was $23 million in 2020.

The company reported operating income of $4 million in the fourth quarter, compared to an operating loss of $69 million in the comparable quarter of 2019. The $73 million improvement reflects the favorable impact of higher selling prices and volumes for wood products ($137 million), including the additional volume from the U.S. sawmills, lower input costs in pulp and paper and the CEWS credit ($10 million), offset in part by lower selling prices and volume for paper ($28 million), higher wood costs - mainly stumpage fees for our Canadian operations - and the net unfavorable impact of charges and credits related to newsprint capacity reduction initiatives ($37 million). Adjusted EBITDA was $129 million, $125 million higher than the fourth quarter of 2019.

"We are weathering the COVID-19 storm with remarkable strength, and I am proud of our commitment to health and safety as well as support for the communities in which we work and live. We continue to enhance the already meaningful relationships across our operating communities. As I head into retirement, I do so with confidence in Resolute. Together, we have taken important steps in our transformation and built a more sustainable and competitive organization," said Yves Laflamme.

Remi G. Lalonde, senior vice president and chief financial officer, and, as of March 1, president and chief executive officer, added: "Following the uncertainty of 2020 and its pandemic-induced challenges, there have been key developments in our business to carry momentum into 2021. There are signs in support of the tailwind in lumber markets, with impressive levels of U.S. housing starts and healthy repair & remodeling activity. We're also lately seeing a marked pick-up in market pulp demand against more balanced global inventories after a prolonged lag. With the quality of our remaining paper assets, there is room to build on the fourth quarter volume gains as end-markets gradually rebalance after the steep pandemic-induced demand drop of 2020. We will continue to drive performance improvements in our tissue business with better portfolio mix and operating efficiency to build on the $17 million of EBITDA in 2020."

Mr. Lalonde continued: "I'm excited to assume the leadership of this company: I've spoken with many stakeholders since my nomination and I'm encouraged by their response, the energy around the Resolute story and the talented team that will move this business forward by accelerating our evolution to generate long-term value for shareholders and to drive sustainable economic activity in the communities where we operate."