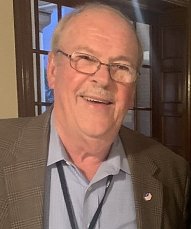 Oct. 19, 2022 - The Association of Independent Printing Paper Merchants (AIPPM) announced that Ron Dennis of Millcraft Paper Company in Nashville, Tennessee, was honored with the Linda Hartinger Award at the 2022 AIPPM Fall Conference, which was recently held at The Broadmoor in Colorado Springs, Colorado. Ron's father, Morris, is a past recipient of the award.

The Linda Hartinger Award, formerly called AIPPM Founder's Award, was renamed to honor the memory of Linda Hartinger, past president of AIPPM and St. Paul, Minnesota-based Anchor Paper. Recipients are recognized for their contributions and leadership of the Association.

Ron got his start in the paper industry prior to high school and worked part time at the wrapping table at Athens Paper Co. in Nashville where his father Morris was employed. He continued working at Athens Paper in a variety of positions throughout high school, eventually working his way into customer service.

Ron took advantage of an opportunity in 1969 when his father decided to start his own company, Dennis Paper, and joined his dad as one of seven employees when the company first opened. Everyone served in a variety of capacities. Ron's primary responsibility was inside sales, and a year later was promoted to outside sales.

Throughout his career, Ron has served primarily in sales and sales management, eventually earning the title of President of Dennis Paper.

Ron served on the AIPPM Board of Directors from 2003 - 2009 and as President in 2008. He also served as Product Committee Chair from 2011-2013. Ron, like his father, has earned the respect of his peers in the Association and industry. His enthusiasm is as strong today as when he first started.

Dennis Paper Co. was one of the original members of the AIPPM in 1992. In 2021, Dennis Paper was acquired by Millcraft Paper Company.

Please join the AIPPM in congratulating Ron Dennis for earning this worthy recognition that honors the memory of Linda Hartinger.

Past recipients of the Linda Hartinger Award include:

The Association of Independent Printing Paper Merchants is committed to bringing growth and value to its members by leveraging its purchasing and marketing opportunities, sharing and encouraging the use of best business practices and promoting the healthy exchange of ideas. For more information, visit: www.aippm.com.