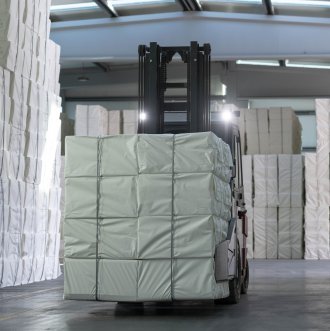 Through its three pulp mills in Portugal, Altri produced a total volume 562.5 thousand tons in the first half of 2022.

Aug. 4, 2022 - Altri Group on July 28 reported results for the first half of 2022. Through its three pulp mills in Portugal, Altri produced a total volume 562.5 thousand tons, a level slightly below the same period of the previous year (-1.5%) due to the scheduled stoppage of one of the industrial units (Biotek). In the second quarter, as a result of the same stoppage, production reached 282.2 thousand tons.

In terms of sales, the volume reached around 589 thousand tons, a slight decrease of 1.1% compared to the first six months of last year, with foreign markets absorbing 504.8 tons, 86% of the total.

The volume of production and sales, but mainly the context of rising prices in international markets, led total revenues, which include income other than fiber, to reach EUR 521.7 million in the first half of 2022, a growth of 41.8% compared to the same period in 2021. In the second quarter, revenues grew 37.8% to EUR 272.5 million.

EBITDA reached EUR 130.8 million in the first half, an increase of 32.7%, while in the second quarter it reached EUR 69.8 million. The EBITDA margin was 25.1%, -1.7 p.p. compared to the same period last year, being 25.6% in the second quarter, a drop of 7.6 p.p. compared to the same period of the previous year, reflecting the increase in costs recorded.

This performance is "achieved in a challenging environment of inflation of various variable costs, a reflection of disruptions in logistics chains, but exacerbated by the invasion of Ukraine by Russia," said José Soares de Pina, CEO of Altri. "The context of a strong increase in energy and raw material prices, especially chemicals and wood, has limited the expansion of profitability and margins obtained by the Altri Group."

Despite a favorable price environment for cellulosic fibers, the inflationary environment of several variable costs limited the evolution of the margin. Even so, the net income from the Altri Group's continued operations reached around EUR 69.6 million in the first six months of 2022, an increase of 56.9% when compared to the same period last year. In the second quarter, profits amounted to EUR 39.8 million, a growth of 23.6% compared to the same quarter of 2021.

The global demand for cellulosic fibers showed a decrease of 0.8% until May 2022, with the demand for Hardwood Pulp decreasing by around 0.3% compared to the same period of 2021. This evolution is clearly influenced by China, which continues to show a decrease (-6.6%), largely explained by factors already identified in 2021 and that continue to restrict many of the economic relations with the Asian country.

However, in the remaining markets there is an increase in demand. The Asia and Pacific region, excluding China, shows increases in demand of +19% in Japan and +6.5% for the rest of Asia/Africa and +36% in Oceania. It is worth noting the stable dynamics in Western Europe (+3.3%), and one of the important factors to confirm the balance of demand and supply in the European market is the level of stocks in ports, which continues to decline monthly since September 2021, reaching an all-time low in April 2022.

Based in Porto, Portugal, Altri Group is a leading European company in the production of eucalyptus pulp, sustainable forest management and renewable energy production. To learn more, visit: altri.pt.