Finnpulp Will No Longer Pursue Plans for Bioproduct Mill in Kuopio, Finland 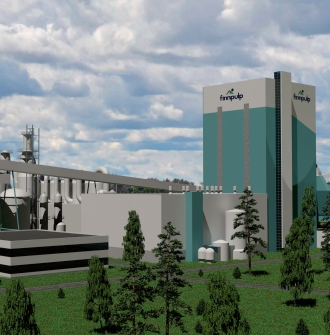 Finnpulp's proposed bioproduct would have had the capacity to produce 1.1 million tons of softwood NBSK pulp, 60,000 tons of crude tall oil and generate 0.8 TWh bioelectricity to the national grid.

April 1, 2022 - Finnpulp announced that it is abandoning plans to build a bioproduct mill in Kuopio in Eastern Finland.

Finnpulp in February of 2015 first announced plans to construct a greenfield softwood pulp mill in Kuopio at an estimated cost of 1.6 billion euros after completing a feasibility study a year earlier.

The mill would have had the capacity to produce 1.1 million tons of softwood NBSK pulp, 60,000 tons of crude tall oil and generate 0.8 TWh bioelectricity to the national grid.

The company started an environmental impact assessment in spring 2015 and a permit was granted by the Regional State Administrative Agency for Eastern Finland in March 2017.

However, in December of 2019 the Supreme Administrative Court (SAC) of Finland (Korkein hallinto-oikeus), the highest court in the Finnish administrative court system, rejected the project's environmental permit on the basis that Finnpulp had not provided sufficient studies.

At the time, Martti Fredrikson, Managing Director of Finnpulp pointed out that the project had been prepared with the best expertise in the world, including leading consultants in the forest industry.

"We have provided all necessary and requested material to the authorities and courts during the permit process. Therefore, the statement in the decision that Finnpulp has not provided sufficient studies is incomprehensible," Fredrikson said at that time.

Fredrikson disagreed with the court's stance that Finnpulp 'should have comprehensively assessed the impact also of all other pollutants on Kallavesi (a lake near the mill site) throughout the mill's estimated economic life cycle (40-50 years).'

"This is a requirement that no industrial mill can meet. No such studies have been required neither during this process nor in previous pulp and paper projects," Fredrikson said.

In May of 2021, Finnpulp filed for an annulment of the negative decision on the environmental permit of the mill project and the immediate granting of an environmental permit, mainly under permit conditions approved by a minority of the SAC, or at least a review of the matter.

The final blow was dealt to the project earlier this year in January, when the SAC issued its decision rejecting Finnpulp's application for annulment of the court's decision in 2019.

Finnpulp said it "has now given the project up. At the same time, the company also gave away the site agreement with the City of Kuopio for the planned Sorsasalo mill area.

"Finnpulp has also had preliminary agreements with the owners of the neighboring properties of the planned mill area. Similarly, these agreements will be abandoned. After this the company does not have any other agreements or plans pending in Kuopio."