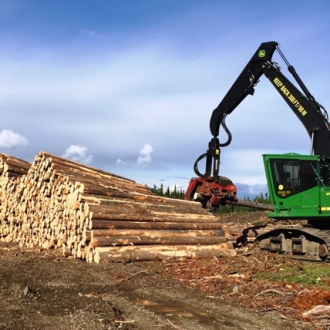 The Government of Saskatchewan is allocating the timber through the Ministry of Energy and Resources under The Forest Resources Management Act.

Sept. 9, 2021 - The Government of Saskatchewan today announced the approval of timber allocations to support the restart of the Paper Excellence pulp mill in Prince Albert, Saskatchewan, Canada.

"One of the key goals of Saskatchewan's Growth Plan is to increase forestry product sales and exports and create more forestry-related jobs in the province," Energy and Resources Minister Bronwyn Eyre said. "The restart of the Paper Excellence pulp mill is expected to create over 1,650 direct and indirect jobs, while enhancing northern and Indigenous economic and labour development opportunities within our world-class forestry sector."

"The reopening of the pulp mill in Prince Albert is welcome news for Saskatchewan's sustainable forestry sector," Environment Minister Warren Kaeding said. "The facility will play an important role in making the most effective use of Saskatchewan's forest resources, including utilizing chips and other smaller pieces of wood from sawmill production."

With the $550 million capital investment by Paper Excellence to refurbish and upgrade the facility, the mill capacity will be 350,000 tonnes of Northern Bleached Softwood Kraft (NBSK) pulp annually, requiring approximately 1,800,000 m3 of softwood fibre. The Government of Saskatchewan is allocating the timber through the Ministry of Energy and Resources under The Forest Resources Management Act. The province is allocating the majority of the timber required for this project, while the remaining balance will be secured by the company through commercial agreements negotiated with other mills, Indigenous timber allocation holders and private landowners.

Carlo Dal Monte, Vice President of Energy and Strategic Development for Catalyst (a Paper Excellence company), said, "This fibre is critical to the restart of the Prince Albert pulp mill which is currently planned for the fall of 2023. This decision reflects the Saskatchewan government's forward thinking and robust job creation ambitions. They have been terrific to work with — taking a real interest in our project and the Prince Albert community."

The Government of Saskatchewan noted that in 2020 more than $1.1 billion worth of Saskatchewan forest products were sold — an almost 30 percent increase over the previous year.