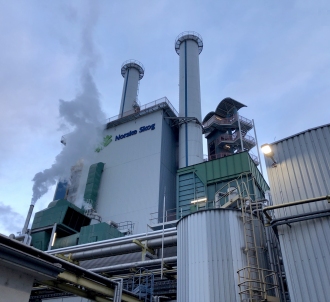 Norske Skog will convert a newsprint machine (PM3) at its Bruck mill in Styria, Austria, to the production of recycled containerboard. The machine will produce 210,000 tonnes per year.

April 29, 2021 - Norske Skog announced a final investment decision to convert one machine at its Bruck mill in Austria from newsprint to recycled containerboard production. The conversion at Bruck will introduce 210,000 tonnes of containerboard capacity to meet the growing demand for renewable packaging.

The project has received financing commitment from regional banks.

"This investment decision represents the coming of a new era for Norske Skog and is a major step to become a leading independent European producer of high-quality, renewable and environmentally produced containerboard," said Sven Ombudstvedt, CEO of Norske Skog. "The conversion project illustrates the inherent potential of our industrial sites and will strengthen Norske Skog's asset base and cash flow generation for decades ahead."

As announced in June 2020, Norske Skog plans to introduce 765,000 tons of recycled containerboard capacity in Europe by investing approximately EUR 350 million to convert two of its paper machines, Bruck PM3 and Golbey PM1 (France) to the production of containerboard. The converted machines are expected to generate an annual EBITDA of approximately NOK 700-800 million in 2025/26, based on historical trend prices for containerboard and recycled fibre.

The final investment decision to convert Bruck PM3 was taken on 22 April, and a similar decision for Golbey PM1 is expected in the second quarter of 2021.

Recycled containerboard production at Bruck PM3 will start in the fourth quarter of 2022 following a three-month shutdown of the machine. Full production utilisation of 210,000 tonnes of testliner and fluting is expected in the second half of 2025.

A new waste-to-energy plant is scheduled to start-up at the Bruck site in the first half of 2022 and will supply cost efficient and sustainable steam for the containerboard production.

The second machine at Bruck, PM4, with capacity of 265,000 tonnes of LWC magazine paper, will continue production unaffected by the project. Norske Skog will remain a committed supplier of high-quality publication paper products, and a strong and reliable supplier of all publication paper grades after the planned conversion.

The Bruck conversion project consists of the following main installations;

"Recycled containerboard production at Bruck will meet this demand with cost-leading and environmental-friendly capacity. Located centrally in continental Europe, the Bruck industrial site is well positioned for the large containerboard market, and it has good and established access to recycled fibre," Ombudstvedt concluded.

Norske Skog is a leading producer of publication paper with strong market positions and customer relations in Europe and Australasia. The Norske Skog group operates four mills in Europe, of which two will produce recycled containerboard following planned conversion projects. In addition, the group operates one publication paper mill, a converting grade mill and one wood pellets facility in Australasia. To learn more, visit: www.norskeskog.com.